The demonstration demanding the resignation of Phillipine President Joseph Estrada / Manila / Phillipines - perspective: from the camera's perspective as shown in the photograph below (at the moment that the below photograph was taken, January 2001)

As per the photograph below. President Estrada is charged with corruption, and thousands of anti-Estrada demonstrators, including leading military and political leaders are at the rally shown below demanding Estrada's resignation. This is an urban area with many subjects and structures. The rally below is a focused gathering. 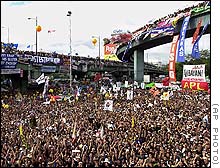