The Freedom March for civil rights as assembled in front of the Washington Monument: perspective - from the camera's perspective as shown in the photo below. (At the moment that the below photo was taken, 28 August 1963.)

As per the picture below. This is an aerial view of the historic event involving over 200,000 people. They are assembled in front of the Washington Monument during the Freedom March for civil rights, Washington, D.C., 28 August, 1963. 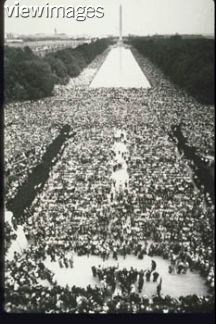