Astronaut Eugene Cernan walking on the surface of the Moon toward the Land Roving Vehicle during the Apollo 17 mission: perspective - from the camera's perspective for the photo below (At the moment of taking the photo below, 13 December 1972)

As per the photo below. One can assume that the Moon Lander is nearby. 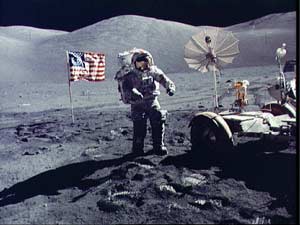