The Temple of Srirangam / India: perspective - from the camera's perspective as shown in the photo below. (At the moment that the below photo was taken.)

As per the picture below. The Temple of Srirangam is located in southern India. It is on an island situated between two arms of the River Cauvery. The Temple site covers a large 156 acres area. The Temple itself has a complicated structural design consisting of seven concentric rectangular enclosures that surround what is called the "santum santorium." 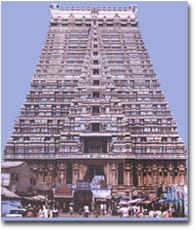