The Jefferson Memorial / Washington, D.C.: perspective - from the camera's perspective as shown in the photo below. (At the moment that the below photo was taken.)

As per the picture below. This is the Jefferson Memorial with the Washington Monument in the background. One can assume there are subjects nearby. 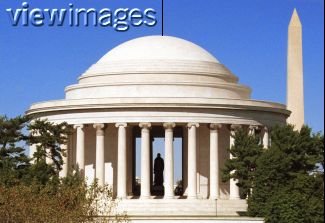