The Mt. Graham International Observatory - perspective: from the camera's perspective as shown in the photograph below (at the moment that the below photograph was taken)

As per the photograph below. The Mt. Graham International Observatory is located near Safford, Arizona on Mt. Graham (part of the Coronado National Forest) in the Pinaleno Mountains. The observatory site is operated by the University of Arizona. The region is mountainous and heavily forrested. There rae currently two telescopes in operation. These are the Heinrich Hertz Submillimeter Telescope (SMT) which has a 10m diameter and the Vatican Observatory/Arizona 1.8m Lennon optical telescope (VATT). This is a joint project between the University of Arizona and the Max-Planck-Institut für Radioastronomie of Germany. 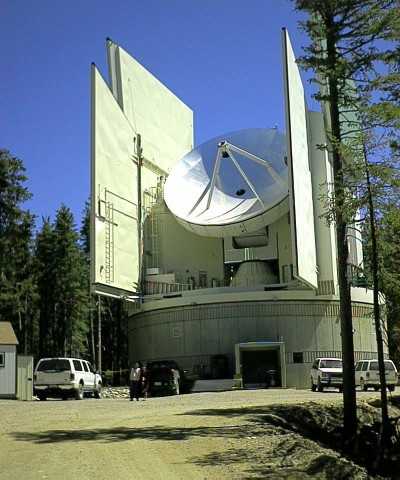