The natural gas explosions / Hutchinson / Kansas - perspective: from the camera's perspective as shown in the photograph below (at the moment that the below photograph was taken, 19 January 2001)

As per the photograph below. There was a natural gas leak in Hutchinson, Kansas. The gas leaked from an underground concrete tube that was used to send gas to an underground storage container. The gas seeped through the ground and burst upwards inside the town. Several buildings were damaged or destroyed. There were 30-foot-high geysers of flaming gas in the town. 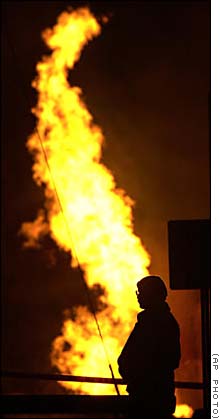